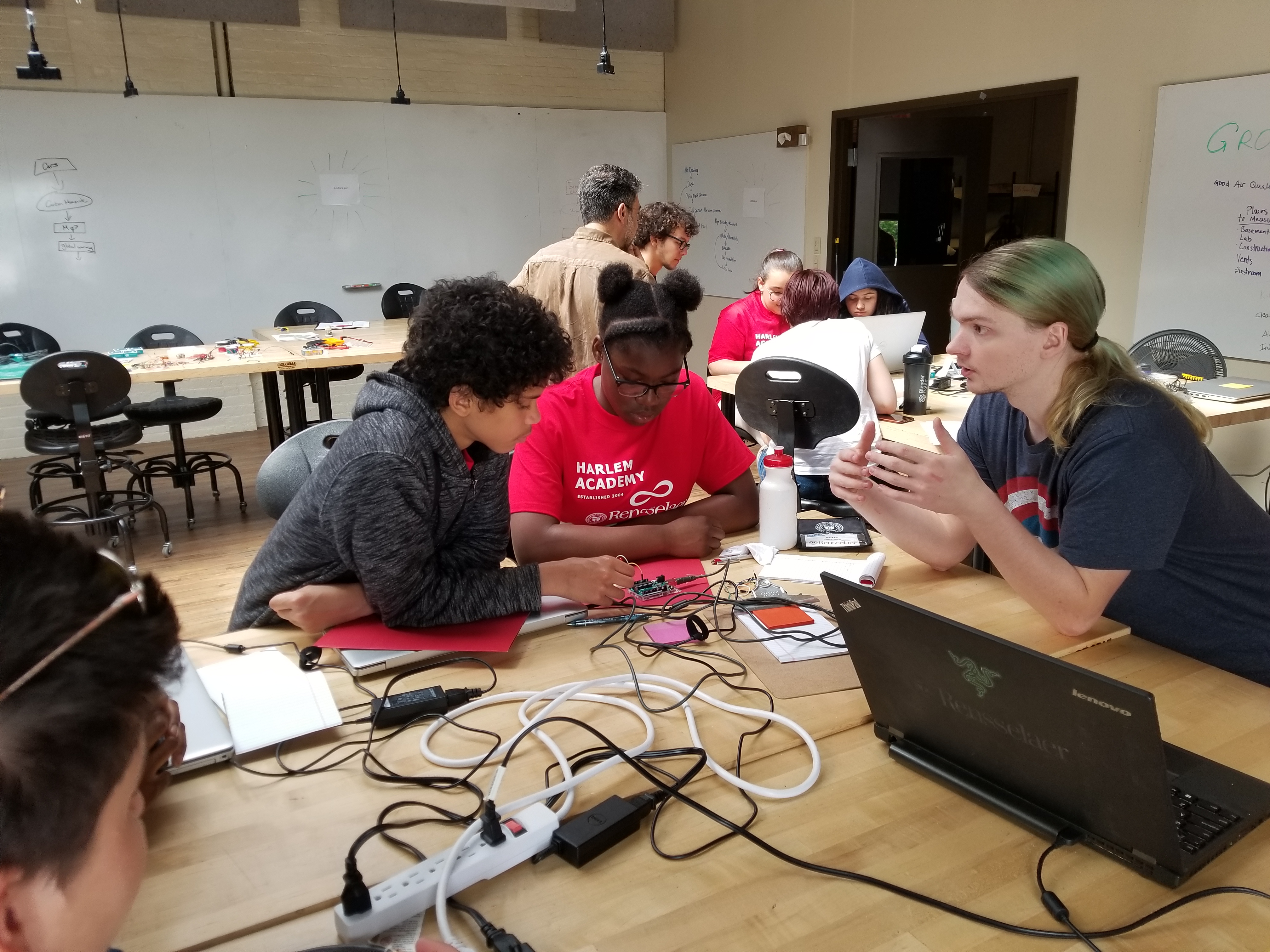 On Wednesday, May 30th through Friday, June 1st, 2018, the Harlem Academy Middle School from Harlem, New York visited RPI for a summer program entitled "Sensors for Generative Justice." The notion of using sensors to assist social justice work had an overarching theme of systems science, also known as Cybernetics, which is the study of how negative feedback can be used to create more realistic control systems or electronic models of ecological systems. This coincided with the introduction of a new CSDT module, "Systems Science", which served as source material for the students. After learning about Systems Science through the cultural background readings and fun simulator games which served to model negative feedback in CSnap!, the Academy students were able to choose which electronic sensor they wanted to spend the next few days studying. Topics included noise pollution, soil quality, urban food and agriculture, drinking water quality, outdoor air quality, and indoor air quality.

The next day students got into their new groups and did some background reading on their selected topic to learn about the social justice-related issues surrounding their form of pollution. This allowed them to form hypotheses for experimentation using resources like a socio-economic map of the area surrounding RPI. With their new hypothesis, they built a sensor using arduinos and breadboards, and some even got to learn how to solder! The time period after lunch on Thursday was used for field research, where hypotheses were tested. The students took their sensor and laptop and collected data from the arduino at various spots around RPI. If all was successful, they returned to the PDI studio to begin number crunching and making some graphs in Google Spreadsheets with their new data points. Simultaneously they built slide shows explaining their sensors, the background information on pollution, and the results of testing their experimental hypothesis.

The next morning, after a brief period to finish up their slide show, the students presented their results to the other groups including younger students from the Academy. The noise pollution group, for example, showed their graph of data from a decibel sensor coupled with a heartrate monitor to demonstrate that increased decibels of sound resulted in a higher beats per minute in average heart rate. The students proposed a number of ways to curb noise pollution, such as plants, thick walls, white noise, curfews, and quiet areas.

The students ultimately learned a lot about how to use electrical engineering and arduino programming to analyze social issues surrounding urbanity and socioeconomic class in the cities in order to propose solutions to environmental pollution using systems science. It's a great opportunity to work with Harlem Academy students each year, and we hope they enjoyed their time at RPI.